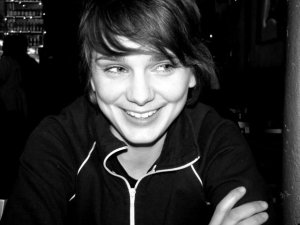 Danielle Evennou is an ex-cheerleader from Central New Jersey.  Her poems have appeared in Blue Collar Review, Objet d’Art, and Xenith. Danielle is the recipient of a Young Artist Grant, and her first chapbook Queen of Tuesday is slated for release in Summer 2010.

DCCAH: Why did you move to DC?

DE: “[I] moved to Washington, DC to escape the big hair of New Jersey and to pursue a career in domestic social policy.”

DCCAH: What is the one quote you live by?

DE: “Don’t pick them up, don’t lay them down, ” the West African Philosopher as explained by Maya Angelou.

Below are two poems by Evennou:

To My Cousin’s Husband

there will be no books.

I stand in line for coffee, long as Sunday.

watch them write their names in sidewalk chalk, dirt-caked

as they sip from biodegradable cups.

Inside the scent seeps into wood floors and clothes

of stylish baristas in with Baltimore bangs.

that amuse both me and the academics.

When it rains, recline on the velvet sofa,

linger to the tune of “Yellow Submarine.”

pinky up. Lovers look lusty under their

behind the counter, speakers full of Eartha

induce an Eiffel Tower, a semblance of

locals and their Labradors, Wreck and Rufus.